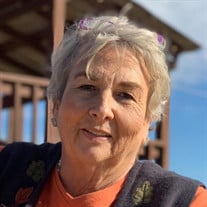 Linda Lou Dowd Thompson went to be with our Lord and Savior March 13, 2022 at the age of 72. A graveside service will be held at 2:00 PM on Wednesday, March 16, 2022 at Illinois Bend Cemetery. Linda was born July 18, 1949 in Gainesville, Texas. She was the first child born to W.D. “Dub” Dowd and Norene Williams Dowd. Linda attended Saint Jo schools and graduated high school in 1967. Upon graduating, Linda attended business school in Fort Worth, Texas for one year. During that year, she and Wendell Thompson began dating and it wasn’t long before they were engaged to be married. Wendell and Linda were married June 8, 1968 at the First United Methodist Church in Saint Jo, Texas. They were married for 50 years until Wendell’s passing in 2019. Linda was a homemaker and mother for several years. Wendell and Linda had 2 children, Melissa and Kyle. Once both children were attending school, Linda decided to go to work for Saint Jo ISD. She started as an aide in the elementary and eventually as the secretary for the superintendent. She loved so many kids as they came through Saint Jo ISD. Many students will tell you of walking into the office stating they were not feeling well and she would reach in her desk for a peppermint to give them. Then suggest they go back to class. She was employed at the school for 34 years. A servant’s heart is the best way to describe her. Linda was known by many as a selfless, loving and generous woman. She gave her heart and soul in everything she did. She took care of everyone. She was the caretaker of her mother, Norene. She ensured her mother could live in her house all of her life. Linda was in and out of Norene’s house several times a day, making sure she was taking care of herself. Her family was her world. She enjoyed spending time with her grandkids and great grandkids. She took her family on numerous vacations to Branson, MO. It was one of her favorite places to go. She loved to travel. But most of all, no matter where the family was, that’s where she wanted to be. She loved deeply and unconditionally. Linda is preceded in death by her father, W.D. “Dub” Dowd and her husband Wendell. She is survived by her mother, Norene Dowd, as well as both of her children, Melissa (Thompson) Chaffin and husband George of Dye Mound, Texas; Kyle Thompson and wife Chelsie also of Dye Mound, Texas, her sister Arlene and husband, Gary of Bowie, Texas. Linda has 4 grandchildren - Kaitlyn Metzler and husband RJ of Alvord, Texas, Luke Chaffin and wife Ashley of Woodbine, Texas, Layton Wayne Thompson and Paisley Carolyn Thompson of Dye Mound, Texas. Linda has 5 great grandchildren - Jase, Gavin and Eli Chaffin; Hagen and Zane Metzler. In lieu of flowers, the family asked that donations be made to the Illinois Bend Cemetery fund. Memorials may be mailed to: Illinois Bend Cemetery, ATTN Wanda Parker, PO Box 512, Saint Jo, Texas.

The family of Linda Lou (Dowd) Thompson created this Life Tributes page to make it easy to share your memories.

Linda Lou Dowd Thompson went to be with our Lord and Savior March...