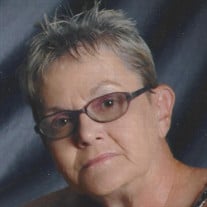 Mass of Christian Burial for Linda F. Vogel, age 70 of Muenster, was held at 10:00 AM, Saturday, August 12, 2017 at Sacred Heart Catholic Church with Father Ken Robinson officiating. Burial followed in Sacred Heart Cemetery. Rosary was held at 9:00 AM, Saturday at the church. Pallbearers were Keith Vogel, Alan Hudspeth, Chance Cameron, Matt Doggett, Kevin Fuhrmann, and Scott Hudspeth. Arrangements were entrusted to Scott Funeral Home in Muenster. Mrs. Vogel died Monday, August 7, 2017. Linda Francis (Dickerson) Vogel was born November 6, 1946 to Roger and Ruth (Clark) Dickerson in Monahans, Texas. She graduated from Gainesville High School and later attended classes at Cooke County College. She married James Vogel on February 8, 1969 in Sacred Heart Catholic Church. Linda worked at Muenster Memorial Hospital and the Gainesville Post Office. While her children were growing up, she kept busy planning Cub Scout activities with Shawn and shopping at Small Fry in Denton with Misty and Tracy. During the summers, the family made trips to the beaches of Texas and across the United States. She had a love/hate relationship with the Dallas Cowboys (depending on how the season was going.) Some of the families most memorable moments were during domino games with the family. She was passionate about gardening, flowers, birds and reading. She loved to attend the school and sporting events of her grandchildren. Linda took daily walks with her dogs and socialized with her neighbors and she enjoyed trips to Walmart and the hair/nail salon. Linda is survived by her husband, James Vogel of Muenster; daughters: Misty and husband, Richard Cameron of Southmayd, Texas and Tracy and husband, Larry Westbrook of Collinsville, TX; son: Shawn and wife, Jennifer Vogel of Saint Jo; seven grandchildren: Chance, Tony and Richie Cameron, Chasity and husband, Matt Doggett, Collin and Logan Westbrook and Jessica Vogel; three great-grandchildren: Aspyn Doggett, Elizabeth and Aubree Cameron and cousin, Pam and Charlie Payne of Frisco. She was preceded in death by her parents, Roger and Ruth (Clark) Dickerson; aunts: Delpha “Sissy” Dickerson and Frances Huffaker; and grandmother “GaGa.” The family requests in lieu of flowers donations be made to Camp Sweeney, P.O. Box 918, Gainesville, TX 76241 or Noah’s Ark SPCA, P.O. Box 405, Gainesville, Texas 76241.

The family of Linda Francis (Dickerson) Vogel created this Life Tributes page to make it easy to share your memories.

Send flowers to the Vogel family.