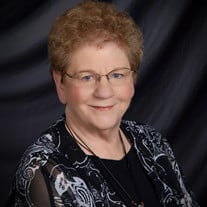 Loretta Ann Droll Felderhoff died on October 14, 2020 at her home. She was the daughter of the late Dorine Halamicek and Henry (Red) Droll. She was born September 12, 1941, in San Angelo Texas. Her family lived in Rowena, Texas and then in Pecos, Texas. She was a 1959 graduate of Pecos High School. After graduating from Loretto Heights College in Denver, Colorado with a Bachelor of Arts degree majoring in mathematics, Loretta worked as a computer programmer for American Telephone and Telegraph Company in Mt. Kisco, NY. She then worked for International Business Machines as a systems analyst. Her positions as analyst and programmer took her to Dallas, Texas, Chicago, Illinois, and Houston, Texas as well as Toronto Canada. In 1972, she married August (Gus) Felderhoff at Holy Trinity Catholic Church in Dallas. They have made their home in Muenster since. Loretta was active in the Muenster Garden Club serving as second vice president and as coordinator for youth activities including the Junior Garden Club. Memberships also included the Muenster Home Demonstration Club and she was one of the original members of the Beta Kappa Chapter of Epsilon Sigma Alpha. She is a lifetime member of Epsilon Sigma Alpha. The Girl Scout program was reintroduced in Muenster and Loretta was a troop leader for three age levels-brownie, girl scout, and senior scout. She served as Service Unit Director and on the board of directors of the Cross Timbers Girl Scout Council. As her children grew, Loretta was instrumental in initiating the Muenster Soccer League and then participated on the board of directors of the Cooke County Soccer League. In 1982, Loretta was the first director of the Young Children’s Learning Center, which was to become Sacred Heart Montessori Preschool. She was a teacher of computer science at Sacred Heart High School with her classes including all grade levels as well as adult classes. In 1989, she became the Business Administrator of Sacred Heart Church and School retiring from that position in 1999. Loretta was a Dame Commander in the Equestrian Order of the Holy Sepulchre of Jerusalem. She is survived by her son and daughter-in-law-August Henry and Britt Felderhoff and granddaughter Olivia of Scottsdale, Arizona, daughter and son-in-law-Julia Marie and Steve Behr, grandson Jack, and granddaughter Abby of Coppell, Texas, daughter and son-in-law Vanessa and Dennis Smith of Belding, Michigan, son and daughter-in-law James and Ashley Felderhoff of Muenster, Texas, grandchildren Crystal Randolph, and Dennis Jr. and Breanna Smith and great-grandchildren Brycen, Parker, and Bailey Mae of Rockford, Michigan and one brother Gary Droll of Gainesville, Texas. She is also survived by numerous cousins and nieces and nephews. Loretta was preceded in death by her husband August Felderhoff of Muenster, her parents, three brothers, Henry Droll Jr., John Droll and an unnamed baby boy Droll, and sister-in-law Margaret Droll. Services held: Rosary and Vigil at 6pm on October 18, 2020 at Sacred Heart Church. Mass of Christian Burial at 10 am on October 19, 2020 celebrating the life of Loretta at Sacred Heart Church in Muenster, Texas with interment at Sacred Heart Cemetery. Memorials may be sent in lieu of flowers to Subiaco Abbey, Subiaco, Arkansas or Equestrian Order of the Holy Sepulchre of Jerusalem-Southwestern Lieutenancy, 2001 Kirby Drive, Suite 902, Houston TX 77019.

Loretta Ann Droll Felderhoff died on October 14, 2020 at her home. She was the daughter of the late Dorine Halamicek and Henry (Red) Droll. She was born September 12, 1941, in San Angelo Texas. Her family lived in Rowena, Texas and then in... View Obituary & Service Information

The family of Loretta Ann (Droll) Felderhoff created this Life Tributes page to make it easy to share your memories.