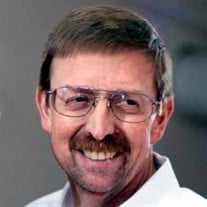 Mass of Christian Burial for Mark Randall Yosten, age 62, of Wylie was held at 10:00 AM on Saturday, July 20, 2019 at Sacred Heart Catholic Church in Muenster. Rosary and Vigil was held at 6:00 PM on Friday, July 19, 2019 at Scott Funeral Home in Muenster. Pallbearers were Brad Yosten, Jeremy Yosten, Caleb Yosten, John Brewer, Matthew Yosten, Nicholas Yosten, Jonathan Yosten, Andrew Yosten, and Aaron Yosten. Mark was born on October 11, 1956 in Gainesville, Texas to Werner John and Frances Bengfort Yosten. He was the seventh of their nine sons. He loved his brothers. They shared an unbreakable bond; they always had each other’s backs. As to his mother, anyone could see the love Mark had for her. That was one of Mark’s qualities that drew Danette to him when they first met. He cared for and loved Frances. After high school, Mark worked with his brother Steve building homes for a time before making a career of his true passion: cars. He worked for a couple of dealerships before settling in at Crest Cadillac in 1991, where he remained right until the end. In August of 1993, Mark met Danette, his soon to be wife, through a mutual friend. When they met, he talked about his brothers, his friends, and the cars they drove. It was a whole new world for Danette, who knew nothing about cars and was one of only two children. Mark had a ‘67 Chevelle, and Mike, Weldon, Jesse, and Karl either had cars or rode with each other as they made the drag on Main Street or drove US-82 from Muenster to Gainesville. Only they know how fast they drove, which is probably for the best. Thankfully, Mark gave up drag racing as far as we know. Mark switched out drag racing for the more family-friendly tradition of always honking the car horn under the railroad bridge outside of Whitesboro when he, Danette and the kids drove on US-82 from US-75 to Muenster. Mark and Danette married a year later, on August 27, 1994. Mark had it easy - he only had to learn Danette’s sister’s name, versus the eight brothers Danette had to memorize. Thankfully, Mark’s mom kept he and his brother’s senior pictures on the wall at her house, so Danette could refer to that if she got stumped. On June 26, 1995, Mark and Danette’s son, Adam Christopher, was born. Two years later, their daughter, Danielle Marie, was born on May 6 of 1997. Their precious granddaughter Ali Marie was born April 24, 2016. In July 2013 Mark was diagnosed with colon cancer. It was a tough battle, but Mark was just as tough. You don’t grow up in a house full of boys without learning how to be brave – or how to fight, for that matter. Mark may have been soft-spoken, but beneath that mild-mannered exterior was a man who was just as stubborn as the cars he worked on. He wasn’t ready to go just yet. He had a big, loving family to fight for and projects he still wanted to tackle. Just last week, he was on the laptop looking for parts! This is the Mark we should remember. Cancer has a way of graying over everything, but Mark would have wanted us to focus on the highlights: his beautiful granddaughter; the Christmas Miracle that allowed him to come home; the fact that his friends Mike, Weldon, and Karl got his Chevelle running and he was able to take it for a spin (with Danette hanging on for dear life); the Cowboys making it into the playoffs, even. Rather than get stuck on the hard part of the last few years, let’s remember the things that made Mark Yosten Mark Yosten: his inside jokes with his family, his personal interest in each of his nieces and nephews, his mustache wiggle, his in-depth knowledge of cars, his wacky Donald Duck voice he was so good at, and most importantly – his deep and loyal love for Danette, Adam, Danielle and Ali. One last request: next time you find yourself driving from US-75 to Muenster on US-82 and you pass under the bridge near Whitesboro, be sure to honk your horn. We will leave it up to you to decide how fast you want to drive while honking… Mark is survived by wife: Danette Yosten; mother: Frances Yosten; son: Adam Yosten; daughter: Danielle Yosten; granddaughter: Ali Marie Yosten; siblings: Daniel and wife Patricia Yosten, Steven and wife Janice Yosten, Christopher Yosten, Ronald Yosten, James and wife Susan Yosten, and Joseph and wife Michele Yosten; mother-in-law: Olene Gray; and sister-in-law: Glenda Brewer. Mark is preceded in death by father: Werner Yosten; brothers: Jerome Yosten and Kenneth Yosten; and father-in-law: Gene Gray.

Mass of Christian Burial for Mark Randall Yosten, age 62, of Wylie was held at 10:00 AM on Saturday, July 20, 2019 at Sacred Heart Catholic Church in Muenster. Rosary and Vigil was held at 6:00 PM on Friday, July 19, 2019 at Scott Funeral Home... View Obituary & Service Information

The family of Mark Randall Yosten created this Life Tributes page to make it easy to share your memories.

Mass of Christian Burial for Mark Randall Yosten, age 62, of...

Send flowers to the Yosten family.