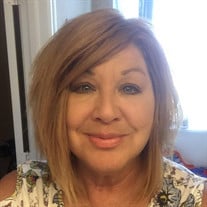 Visitation for Mary “Jackie” Jacquelin (Estep) Hoenig, age 56 of Lindsay, is set for 6:00 PM, Tuesday, March 27, 2018 at Scott Funeral Home in Muenster. Mrs. Hoenig passed away Thursday, March 22, 2018. Jackie was born October 28, 1961 in Enid, Oklahoma to Floyd and Virginia (Mobbs) Estep. To say that Jackie was a very special woman would not do her justice. She was loved by all who knew her. Always with a smile on her face, Jackie naturally made friends with and was loved by everyone who was blessed to meet her. Jackie held these friendships close and each friend had a special place in her heart. Of course, Jackie also enjoyed her family, and dedicated her life to being Matthew's mom. After Matthew was grown, all who knew her could attest that she found her forever true love when she met Bryan. Bryan and Jackie loved spending time together doing anything, whether planting their spring flowers or spending time at the family farm together. But some of their best times together were spent in their many travels, exploring new places. Some were relaxing, others didn't go exactly as planned, but in typical Jackie-style, she made them just as memorable and treasured. Matthew and Melanie blessed Jackie with her first precious grandson, Caleb, and that blessing multiplied when grandson Tony followed a few years later. Jackie spent many nights having Caleb over for sleepovers, and Caleb would tell you she was the BEST Mimi! Caleb knew that even though Pop was lots of fun and a pushover, he could usually get whatever he wanted from Mimi with just one special look from him. When Tony arrived, Jackie's fun doubled. Jackie had so much love for her grandsons and they quickly became her pride and joy. Jackie was a special woman to so many and brought a dose of sunshine and happiness to all of us around her. We are in some way each a better person for having known Jackie. She will be so greatly missed. Jackie is survived by her husband, Bryan Hoenig of Lindsay, son, Mathew (Melanie) Dougherty of Gainesville, grandchildren, Caleb and Tony Dougherty of Gainesville, mother, Virginia (Al) Haney of McKinney, and sister, Michelle (Mark) Hoenig of Gainesville. She was preceded in death by her father, Floyd Estep and brother, Greg Estep.

The family of Mary "Jackie" Jacquelin (Estep) Hoenig created this Life Tributes page to make it easy to share your memories.

Send flowers to the Hoenig family.