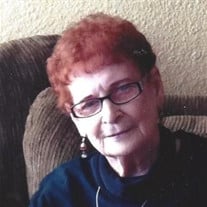 Mary Irene Callahan Wallace was received into her Lord’s arms on March 29, 2018 at 12:28 pm. She was two months shy of her 97th birthday. Irene was born on June 2, 1921 in McKinney, Texas. Her parents were Frank Callahan, Sr., and Flora Geneva Lindsay Callahan. She had 5 children, 21 grandchildren, 42 great-grandchildren and 20 great-great-grandchildren. Children include: Bobby Wallace, and spouse, Annetta, Johnny Wallace and spouse Beverly, Carolyn Martin and spouse Duane, Eddy Wallace and spouse, Debbie, Stanley Wallace and spouse, JacQue. Grandchildren are: Bobby Wallace, Mary Wooley, Lisa Stephan, Scott Wallace and Clint Wallace, Tammy Wallace, Karen Wallace, John Wallace, Tina McPherson, Angela Harris, Tommy McPherson, Melissa McPherson, Kevin Wallace, Shawn Wallace, Mandy Schkade, Aimee Wallace, Carrie Wallace, Brent Wallace, Amber Adair and Chase Wallace. She had 20 great-grandchildren and a host of friends and loved ones. She was preceded in death by her husband, parents, brother, sister, 2 sons and a daughter-in-law. Irene, as she was known, lived in Grand Prairie many of her years until she moved to Saint Jo in 1999, and then to Denton in 2012. While in Saint Jo, she attended Landmark Baptist Church and First Baptist Church. She never met a stranger but was an outgoing, funny red head who enjoyed life to its fullest. She held many positions during her years here but her most favorite one was that of a mother. Her children were her first love and she wouldn’t hesitate to let you know that. Her personality fit the color of her hair perfectly. She was a feisty woman and always looked her best. She was loved by many and will be missed. A Memorial Service is scheduled for April 21, 2018 at 10:00 AM at Landmark Baptist Church in Saint Jo, and a Celebration of Life is scheduled on her 97th birthday at a location to be announced.

The family of Mary Irene Wallace created this Life Tributes page to make it easy to share your memories.

Mary Irene Callahan Wallace was received into her Lord’s arms...

Send flowers to the Wallace family.