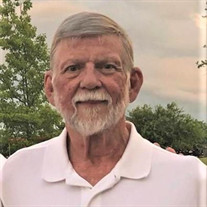 Melvyn Jackson Brittian Jr. (Jack), 73, passed away September 22, 2021. He was a devoted husband, father, grandfather, brother, and friend. Born to Melvyn & Mable Gotcher Brittian, September 17, 1947 in Decatur. Jack had one brother Ron, and two sisters Jane and Sheryl. He grew up in Denton. Jack graduated from Denton High School in 1967. He married Eileen Rombach December 30, 1967. They had Melynda Eileen Rivers and Rachel Nicole Brittian. He grew up Baptist, but converted to Catholicism in April of 1990. In November 1990, he married Debbie Felderhoff Fisher she has three children Dyan, Bradley, and Greg. Almost 30 years after high school graduation he graduated with his Bachelor of Business Science Business Management from LeTourneau University on May 3, 1997. Jack was a very faithful man and God was always close to his heart. He was known for always saying the blessing at family gatherings. He even said the blessing via FaceTime from the hospital for his grandson’s 21st birthday. He started working at the age of 13 at a local grocery store. He later worked at Moore Business Forms where he met some of his lifelong friends Roland Walker, James Campbell, and David Lewis and after closing the Denton plant, he went to work for Peterbilt. During his career there, he became cherished friends with Richard Fielder and Lynn Daily. They were referred to as the Three Amigos! After retiring from Peterbilt, Jack & Debbie moved back to Muenster. He worked for UMI and there he met his friend Wayne Gann. His last place of employment was at Winstar where he had many friends as well. He had a way of making friends. Jack loved being a PawPaw and always enjoyed going to watch his grandchildren play football, baseball, basketball, cheerleading, one act play and stock shows. Jack was a hunter. He loved going deer/elk hunting especially in Colorado. Jack & Tommy took Dane after his high school graduation. He was so looking forward to his upcoming trip this October. He had many plans for this trip. Jack is survived by his wife, Debbie, daughters Melynda Rivers (Kent), Rachel Brittian, Dyan Huchton (Tommy), sons Bradley Fisher (Brandy), and Greg Fisher (Nova), grandchildren Ashlyn Craven (Kevin), Makanna Rivers, Sophia Pentico, Dane Huchton, Dylan Huchton, Emma Pentico, Debra Huchton, Brittian Fisher, Jackson Pentico, great grandchildren Taylor and Allibelle Craven, mother-in-law Trudy Felderhoff, sisters Jane Radlinski and Sheryl Pace (Robert), in-laws Janie Hennigan (Mike), Carol Klement and Brenda Simpson and numerous nieces and nephews. He was preceded in death by his parents, father-in-law Vince Felderhoff, brother Ron, in-laws Mike Felderhoff and Roy Klement. Visitation and Rosary was held on Friday September 24 at Scott Funeral Home in Muenster. Funeral Mass and Christian Burial was held Saturday, September 25, at Sacred Heart Catholic Church in Muenster presided by Father Joseph Keating. In lieu of flowers, please consider donating to the American Diabetes Association, P.O. Box 7023 Merrifield, VA 22116-7023, Muenster Jaycees, Muenster ISD Education Foundation, or your local fire department.

The family of Melvyn Jack Brittian created this Life Tributes page to make it easy to share your memories.

Send flowers to the Brittian family.