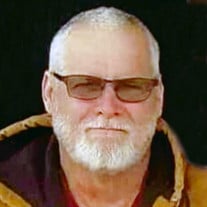 Mass of Christian Burial for Mitchell Owen Rains, age 57, of Myra will be held at 10:00 AM on Thursday, August 6, 2020 at Sacred Heart Catholic Church. Rosary and Vigil will be held at 6:00 PM on Wednesday, August 5, 2020 at Scott Funeral Home in Muenster. Mitchell passed away peacefully at his home surrounded by family on August 1, 2020. Mitchell was born to Millard Charles and Dolly Faye (Simmons) Rains on November 20, 1962. He graduated from Gainesville High School in 1981. Simply put, Mitchell was a jack of all trades and loved working with his hands. From working on cars, woodwork, plumbing and maintenance work, there wasn’t much he couldn’t do. It was in 1975 that he was introduced to his true passion, dirt track racing by Abe Andrews (Honest Abe). He started out at Abe’s mechanic and only after two years he began racing himself in 1977 and continued to race until his end of time. On December 21, 1992, he married Linda Jo Grewing. Together they raised three amazing children: Chris, Tiffany, and Nicole and were blessed with six grandchildren along the way. Mitchell enjoyed riding four wheelers, playing in the mud, camping, boating, hosting cook outs, helping anybody and everybody out, and just being surrounded by family and friends. But anybody that knew Mitchell knew that attending any and all racing events were his most favorite hobby of all. Mitchell is survived by his wife of 27 years, Linda Jo (Grewing) Rains; son: Chris and wife Brooksann Rains and their children Kaitlynn, Bryce and Adaline, all of Sadler, Texas; daughter: Tiffany Rains and her significant other Jason Britain and their three children Trever, Trinity and Tristyn all of Forestburg, Texas; daughter: Nicole Rains of Myra, Texas and her boyfriend Mitchell York of Sulphur, Oklahoma; mother: Dolly Rains of Gainesville, Texas; sisters: Linda Sue Rains of Gainesville, Texas, Shirley Coulter of Little Elm, Texas, Jeral and husband Donald Whitfield of Gainesville, Texas, Dee Ann and husband Adam Knight of Granbury, Texas; brother: Randy Rains of Gainesville, Texas; numerous nieces, nephews, great nieces and great nephews. Mitchell is preceded in death by his father: Millard Charles Rains; grandparents: Owen and Ruby Rains; father-in-law: Joe Grewing; special family friend: Don Ray Moon; nephew: Jason ‘Jay-Bob’ Luttmer; niece: Paige Grewing; sister-in-law: Rebecca Jo Grewing; along with several close friends. “I will see you all on the other side but will be watching over you.” -Michell Rains

The family of Mitchell Owen Rains created this Life Tributes page to make it easy to share your memories.

Mass of Christian Burial for Mitchell Owen Rains, age 57, of...

Send flowers to the Rains family.