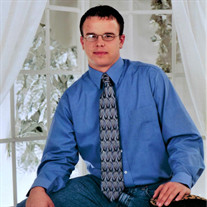 Nathan Clay Sicking was born to Mark Sicking and Mary Kay Grewing on May 26, 1986. Nathan married Daisy Ann (Stockard) Sicking on December 22, 2018 and became a step-dad to Piper and Jasper. While in school at Muenster High School where he graduated in 2004, Nathan enjoyed a variety of activities from playing sports (especially football), showing calves, to UIL number sense. He always had confidence that he could succeed. As mark was dropping him off at a number sense competition one morning, he told Nathan that he might not do as well since there were 3A schools competing. Nathan replied saying “we’ll see about that”. Sure enough, he placed 2nd that day. Nathan was known for his big heart, smile, and infectiously loud laugh and personality. He always had a joke ready for you. He loved hunting and fishing. Nathan has the record for the largest deer in the family thus far. He especially loved taking the kids with him fishing. Jasper and Piper really enjoyed the time they spent with Nathan at the pond. Family was very important to Nathan. He would always pick spending time with family and friends over anything else. Nathan loved to cook; there wasn’t anything he couldn’t cook. Cassie remembers coming home from school, hungry for a snack. Rather than an ordinary after school snack, Nathan would sauté mushrooms or whip up a batch of salsa. Nathan’s specialty was salsa. He loved to make it for his family and friends. When planning family gatherings with Aaron and Jessica, he would cater to whatever they were in the mood for; REGARDLESS of what it might be. There are so many good memories with Nathan. Nathan was drawn to Daisy and tried to get her attention early on. Nathan worked at UMI and Daisy at Bayers. Nathan would sneak off and go to Bayers for his breaks to flirt. One morning, Nathan got his nerve up and left her a note on her car door saying “if you wanna have a good time, call me. -Nathan S.”. She waited 24 hours before she called him, and the rest was history. Both had so much love for each other. Nathan was a creature of habit. If you were going to be hanging out with Nathan, you could bet money that he would be wearing one of his three wrinkled blue polo shirts. With only being 14 months apart in age, Nathan’s favorite pastime growing up was to annoy Cassie. She remembers trying to do homework while he insisted on playing drums with his pencils. Many close friends and family will be able to recall some of Nathan’s impressions. He loved to randomly make them laugh by asking “if you were a hot dog, would you eat yourself? I know I would”. He knew how to make the right moral choices in life. Nathan was so forgiving that even if someone did him wrong, he would forgive them in a matter of minutes. He always looked out for everyone. It was his mission to see people happy. He didn’t want to see anyone hurting. Just last week, he knew that Cassie was having a rough day, so he made sure to bring her supper. He stayed until he knew she was doing ok and her night was much better. Time didn’t seem to matter to him, it was more important that you be content and happy. His mom knew that Nathan would never leave a conversation without saying “I love you”. Nathan worked at Universal Machining Industries. He was always good with numbers and attended several seminars to help him to grow at work. Nathan passed away on Tuesday, August 18, 2020. Mass of Christian Burial was held at 10:00 AM on Monday, August 24, 2020 at Sacred Heart Catholic Church with Father Joseph Keating officiating. Burial followed at Sacred Heart Cemetery. Rosary and vigil was held at 6:00 PM on Sunday, August 23, 2020 at Sacred Heart Catholic Church with Deacon Gary Endres officiating. Pallbearers for Nathan were Micah Webster, Jessie Coker, John Sturm, Jeremy Yosten, Jory Wolf, and Jacking Wolf. Readings were done by Mattie and Craig Hartman, offering assistant was Kathy Vogel, and Cassie Sicking read the Eulogy at the Rosary and Vigil. He is survived by his wife Daisy Ann Sicking of Muenster; children: Piper and Jasper Stockard of Muenster; parents: Mary Kay Grewing and Mark Sicking, both of Muenster; brothers: Aaron and wife Jessica Sicking of Crowley, and Dillon Sicking of Muenster; sister: Cassandra ‘Cassie’ Sicking of Muenster; nieces: Savannah Sicking of Crowley and Raylee Sicking of Muenster; nephew: Bodee Sicking of Muenster; grandmother: Bernice Sicking of Myra; his beloved dog Bling; along with several aunts and uncles and numerous cousins. Nathan is preceded in death by his grandparents Rich and Florence Grewing and his grandfather Paul Sicking. Nathan will be missed by so many. It was a true privilege to get to call him brother or friend. We would give anything to see one more belly slap or hear him sing “It’s 9 o’clock on a Saturday” again. We love you brother.

Nathan Clay Sicking was born to Mark Sicking and Mary Kay Grewing on May 26, 1986. Nathan married Daisy Ann (Stockard) Sicking on December 22, 2018 and became a step-dad to Piper and Jasper. While in school at Muenster High School where he graduated... View Obituary & Service Information

The family of Nathan Clay Sicking created this Life Tributes page to make it easy to share your memories.

Send flowers to the Sicking family.