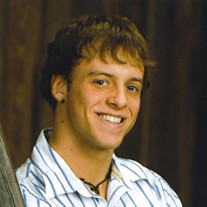 Mass of Christian Burial for Nicholas Phillip Flusche, age 26, is set for 10:30 AM, Wednesday, May 10, 2017 at Sacred Heart Catholic Church with Father Ken Robinson officiating. Burial will follow in Sacred Heart Cemetery. Rosary will be held at 6:30 PM followed by the Vigil at 7:00 PM, Tuesday, May 9, 2017 both at the church. All services are under the direction of Scott Funeral Home in Muenster. Mr. Flusche died Wednesday, May 3, 2017. Nick was born August 10, 1990 in Bridgeport, TX to Phillip and Brenda (Krahl) Flusche. He was the oldest of their seven children. The Flusches lived in Decatur, TX for eight years, in Gainesville, TX for one year, and moved to Muenster, TX in May of 1995. Nicholas began his elementary education at Sacred Heart Catholic School in 1995. He attended Sacred Heart through fifth grade, and Nicholas graduated from Muenster ISD in 2008. He was enrolled North Central Texas College in Gainesville from 2008-2009. In the fall of 2009, Nicolas transferred to Texas State University in San Marcos, TX to pursue a career in business. Nicholas lived most of his life in Muenster. While living in Muenster, he became well-known for his athletic abilities. He loved playing basketball, lifting weights, riding bicycles, and participating in motocross. During his freshman and sophomore years of high school, Nicholas was a running back for the Muenster Hornets football team. Nicholas later found his true passion for basketball, tremendously excelling in this sport. He was voted the District’s Most Valuable Player his senior year of high school. Upon graduating high school, Nicholas began working in the oil field for a family friend while attending NCTC. After moving to San Marcos, TX, he found a local sales job for the company True Protection. Nicholas eventually became the top salesman of the company in Austin. Nick is survived by: his parents, Phillip and Brenda (Krahl) Flusche of Muenster, sister Jacqueline (Flusche) Burkepile and brother-in-law Mat Burkepile of Denton, sisters Adria Flusche and Kendra Flusche of Muenster; brothers: Kevin Flusche of Denton, Zachary Flusche of Muenster, and Nathan Flusche of Muenster; nephew, Mathew Burkepile of Denton; grandmother, Nancy Krahl of Valley View; step grandmother, Judy Flusche of Decatur; and numerous aunts, uncles and cousins. He was preceded in death by his grandfather, Martin Krahl, and grandparents, James and Sally Flusche.

Mass of Christian Burial for Nicholas Phillip Flusche, age 26, is set for 10:30 AM, Wednesday, May 10, 2017 at Sacred Heart Catholic Church with Father Ken Robinson officiating. Burial will follow in Sacred Heart Cemetery. Rosary will be... View Obituary & Service Information

The family of Nicholas Phillip (Nick) Flusche created this Life Tributes page to make it easy to share your memories.

Send flowers to the Flusche family.