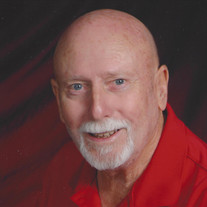 Norman Everett Archer of Saint Jo, Texas passed away on 2/15/2017 at Nocona General Hospital. Norman was born to Everett and Alberta (Macho) Archer on 4/23/1942 in Goodland, KS. He graduated from Kanorado High School in the spring of 1961 and Parks Business College in Denver, CO in 1962. He was working in J.C. Penny's accounting department in Denver, CO, when his dad called and wanted his help at the farm. While back at home in Kanorado, KS, he met Ann Baker and joined the Colorado National Guard. In August of 1965, he and Ann were married. He worked as a bookkeeper at a grain elevator in Colorado and while there his two sons, Ray and Jim, were born. His career took the family to McCook, NE then to Newcastle, WY. He spent 35 years in Newcastle working for Jacobs Ranch Mine as a coal miner. When he retired from the coalmine, he found a new love, golf. Norm and family enjoyed hunting in the Black Hills and Jackson Hole, & fishing in New Mexico and the Red River in Texas. Norm and Ann were snowbirds and loved to spend the winters in Mission, TX. Eventually, they sold their home in WY and moved their summer homebase to Saint Jo, TX. This brought them closer to their sons and grandchildren and enabled them to continue to winter in Mission, with their snowbird family. In Mission, golf, RATS, shopping trips to Mexico, potlucks were some of the many activities. Norman is survived by his wife of 51 yrs., Ann, son and daughter-in-law, Ray & Julie Archer of Krum, TX, son Jim Archer of Grand Prairie, TX, grandson Wyatt Archer of Richardson, TX, granddaughter Macy Archer of Krum, TX, sister Carol Simmering of Quinter, KS, brother-in-law, Calvin Baker of Douglas, WY, a nephew, Cody Baker of Douglas, WY & three nieces, Shelby Baker of Cheyenne, WY, Laura Blickenstaff of Overland Park, KS, and Debra Turner of Littleton, CO. Norm requested no services, but to remember the fun times and great stories. Please send cards to Ann Archer P.O. Box 640, Saint Jo, TX 76265.

Norman Everett Archer of Saint Jo, Texas passed away on 2/15/2017 at Nocona General Hospital. Norman was born to Everett and Alberta (Macho) Archer on 4/23/1942 in Goodland, KS. He graduated from Kanorado High School in the spring of 1961... View Obituary & Service Information

The family of Norman Everett Archer created this Life Tributes page to make it easy to share your memories.

Send flowers to the Archer family.