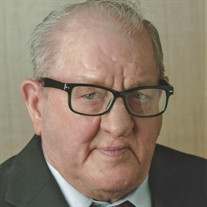 Rosary and Vigil for Patrick Mathew Knabe, age 74, of Muenster was held at 6:00 PM on Tuesday, March 5, 2019 at Scott Funeral Chapel in Muenster. Mass of Christian Burial was held at 10:00 AM on Wednesday, March 6, 2019 at Sacred Heart Catholic Church. Burial to follow at Sacred Heart Cemetery. Pallbearers were Tristan Laliberte, Tim Knabe, Jeremy Bayer, John Knabe, Jeff Walterscheid, and Heath Bayer. Funeral under the direction of Scott Funeral Home in Muenster. Pat was born on April 17, 1944 to Norbert N. Knabe and Juanita Muller in Muenster, Texas. He married Shirley Dittfurth on September 4, 1971. He lived a full life and was a ball of energy. During high school and beyond, Pat rose early to help around the local farms by milking cows. Pat was adventurous and loved everyone, he met no stranger. For example, while in Germany during pre-ceremony events, he had sat down beside a lady he had never met before and they talked for hours just like they were old friends; she still sends messages today about how much she enjoyed his visit. He definitely had a gift of gab which earned him the nickname of ‘Motor Mouth’ in school which was later passed down to the next generation. He also enjoyed having fun and could be quite the prankster. As a kid, he was a busy boy and ready to do anything fun. Including, spraying the babysitter with the water hose. That joy for fun carried on into his adult life as many of us fell victim to his pranks. One of his most infamous pranks, and one yet to be topped to this day, involved: an insurance convention, some friends, a beach, and a sand crab named Fred. Fred had been captured the day before and was going to be taken home as a pet. Once the festivities of the day had concluded and everyone returned to the room, someone had noticed that Fred had met his untimely demise. Being he good agent that he was, pat place a call to his supervisor, never minding that it was 2:30 in the morning, to report the passing of Fred. After several minutes of inconsolable discussion of who the heck Fred was and where he lived, it was revealed that Fred was a sand crab. Needless to say, his supervisor was less than appreciative of the news. After graduating high school, Pat signed up for the Navy to set sail and see the world. But, as luck would have it, after Basic Training, the Navy flew him to Midway Island. He made many trips back and forth from that lonely island, but never once set foot on a ship to sail the seas allowing him to fulfill his dreams of seeing the world. During his service time with the United States Navy, Pat trained to be a fireman and shared many stories of his adventures on Midway Island. After serving his time in the United States Navy, Pat purchased his first car ever; a Mustang that he loved to drive and drive fast. The mustang was eventually replaced by his most beloved white Pontiac. During this time, he held multiple jobs working as an insurance representative for Catholic Life Insurance where he ranked as a 12 apostle for 22 of his 43 years as an agent. He also worked in the auto industry with his brother Herbie and later with his son Rodney. Pat loved his family and will be dearly missed by all who knew him, both near and far. Mr. Knabe passed away on March 3, 2019. Mr. Knabe is survived by wife Shirley (Dittfurth) Knabe of Muenster; daughters: Tonya and husband Shannon Laliberte of Germany, Misty and husband Kevin Mukherjee of Ashburne, VA, Crystal Knabe of Muenster; sons: Rodney and wife Brandie Knabe, Roy and wife Tiffany Knabe, and Eric and wife Krissy Knabe all of Delaware; grandchildren: Tristan, Cassie and Christian Laliberte, Katlain Hogue, Skyler and Kaidence Knabe, Tyson, Jenna, and Kristen Mukherjee, and Madison Knabe; sisters: Elizabeth and husband Daniel Cross of Sherman, Mary and husband Claude Bayer, Barbara and husband Clinton Bayer, Donna and husband Paul Bayer, Bernadette and husband Ed Otto all of Muenster; brothers: Herbie and wife Edna Knabe, and Henry and wife Florentine Knabe all of Muenster; sisters-in-law: Phyllis Dittfurth, Sandy and husband jerry Miller, Patricia Dittfurth, Toni Graham, and Judy and husband Coy Muller; brothers-in-law: Tommy Dittfurth, and David and wife Pam Dittfurth; parents-in-law: Dick and wife Celine Dittfurth. Mr. Knabe is preceded in death by his parents, niece Alicia Knabe and nephew Harlie Bayer.

Rosary and Vigil for Patrick Mathew Knabe, age 74, of Muenster was held at 6:00 PM on Tuesday, March 5, 2019 at Scott Funeral Chapel in Muenster. Mass of Christian Burial was held at 10:00 AM on Wednesday, March 6, 2019 at Sacred Heart Catholic... View Obituary & Service Information

The family of Patrick Mathew Knabe created this Life Tributes page to make it easy to share your memories.

Rosary and Vigil for Patrick Mathew Knabe, age 74, of Muenster...

Send flowers to the Knabe family.