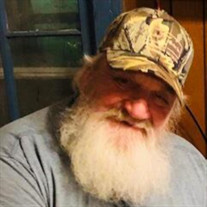 Mass of Christian Burial for Philip Lee 'Phil' Mullins, age 76, of Muenster will be held at 10:00 AM on Friday, May 21, 2021 at Sacred Heart Catholic Church. Rosary and Vigil will be held at 6:00 PM on Thursday, May 20, 2021 at Scott Funeral Home in Muenster. Phil was born on August 9, 1944 in Morton, Washington. He was the second of four sons. A tumultuous childhood led Phil to a more self-reliant life at a young age. After years of traveling and taking on odd jobs to survive, he joined a carnival and was a tilt-a-whirl operator. In August of 1969, the carnival was at the Cooke County Fair and that is where skinny, scrawny bold Phil saw a girl delivering meat and being a smart mouth, he asked her if she had time to get married. Little did he know, Pauline Tempel found that to be charming. A couple of months later on the morning of Pauline’s 18th birthday, October 22, 1969, the two snuck to the courthouse and got married. The family joke was that they had a true shotgun wedding because Pauline’s uncle actually showed up to the courthouse with a gun to stop the wedding! Pauline and Phil welcomed their firstborn, a daughter, Marcy in December of 1970. A son, Darrell, who was named after Phil’s older brother that passed away in a logging accident, was born in January of 1972. Even though they only had 2 children at the time, everyone thought they had so many more because they helped raise Pauline’s younger siblings. In 1978, they had their daughter Holly. Phil worked in the oil fields, hauled hay, and became an equipment operator in the sand and gravel industry. No matter what he did, he always managed to find a reason to cook for everyone. Some of his favorite stories were making turtle soup for Zeke Hess, cooking a skunk for a coworker who constantly was stealing other’s food, and throwing parties so he could cook for the kids’ friends. He always said if smoke is rolling out of the smoker, then you know you are invited over for some BBQ! Even though he was a big, rough and tough man, Phil had a huge heart and a soft spot for a hard luck story. He always tried to help people. One time, he saw a young couple on the side of the road. Phil stopped to help them. He ended up not only giving them money but brought their dog home so it had a safe place to stay until they could return and gave them a motorcycle helmet. He was always a firm believer in not judging a book by its cover. He also loved to trade anything; he formed many friendships this way. Always asking “what do you have to trade?”, “what do you want?”, and “what’s the boot?”. Sometimes he would chuckle and say, “he got the best of me on that one”. He and Meatball would argue for hours about the stuff they would swap back and forth to each other. Phil was a huge animal lover, always having dogs and every kind of animal possible. Everyone in town, especially the workers at Sonic, knew Phil and Rusty, his chocolate lab. Every day Phil would take Rusty for a ride which seemed to always include a trip to Sonic for Rusty to get ice cream. After Rusty passed, Phil adopted Sam and spoiled him just as much. The girls drafted him and Pauline as the unofficial mascots of the PTO where they got to visit, catch up, and get to know the kids at school while cheering them on. Phil would always perk up on game days. Dad was a big fan of hitting the backroads for a Sunday drive, telling a story about some adventure he and Johnny had, or “this is the corn field he and mom robbed while Lenny and Benny were in the same field as well”, or “this is where Pooder and Greg got into a little trouble!!” When Pauline passed just seven short months before their 50th anniversary, it really devastated him. So, now, after 805 days, he reunited with his soulmate in heaven on May 17, 2021. Phil is survived by daughters: Marcy Mullins of Muenster and Holly Mullins of Muenster; son: Darrell and wife Jeanann Mullins of Stephenville; brother: Thom Mullins and family of Mica, WA; sisters-in-law and brothers-in-law: Lucille and husband Steve Jeffries of Gainesville, Babe and husband Henry Knabe of Muenster, Charlie Switzer of Myra, Norma and husband Alan Britain of Forestburg, and Peachy and husband Scott Switzer of Overbook, OK; honorary daughter: Teresa Moseley of Muenster; and Niece: LaDonna Williams of Scottsboro, AL. He was preceded in death by wife: Pauline Ann (Tempel) Mullins; parents: Jody and Ledonna (Smith) Mullins; brothers: Darrell Mullins and John Mullins; brothers-in-law: Kevin ‘Meatball’ Switzer, and Larry ‘Pooder’ Switzer. In lieu of flowers, memorials can be made to the Muenster FFA BBQ Team in the care of the Muenster Education Foundation.

The family of Philip Lee 'Phil' Mullins created this Life Tributes page to make it easy to share your memories.

Send flowers to the Mullins family.