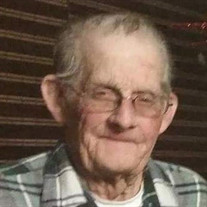 Richard “Fuzzy” Bernard Herr, age 74 of Muenster passed away on Sunday, July 9, 2017. Funeral service will be held at 5:00 PM, Thursday, July 13, 2017 at Scott Funeral Chapel in Muenster. Services will be officiated by Rev. Ricky Kerr. Burial will follow in Resthaven Cemetery in Gainesville. A visitation will be held from 7:00 PM to 8:00 PM Wednesday, July 12, 2017 at the funeral home in Muenster. Rosary will be held at 4:00 PM, Thursday, July 13, 2017 at the funeral home. Pallbearers are Brad Webster, James Klement, Charlie Davis, Jacob Schmidlkofer, HR Herr, and Andy Herr. Arrangements have been entrusted to Scott Funeral Home in Muenster. Fuzzy, as his family and friends called him, was born May 19, 1943 in Muenster to John and Ursula Sophia (Koelzer) Herr. He was raised Catholic at Sacred Heart where he was a Mass server. After the death of his first wife, he continued making his home in Muenster. On December 28, 1974, he married Anna (Cleere) Webster. He worked for the MKT railroad, Johnson Motor Co., Jimmy Jack Bifle, the “cheese plant” and retired from the city of Muenster. Fuzzy loved fishing and gardening. He was an avid reader of newspapers and books and enjoyed all types of puzzles. Fuzzy loved to sit on the porch or in his garage and listen to the Texas Rangers ballgame on the radio. Fuzzy was a loving husband and father who was very proud of all of his family. He has gone now to find peace and is surrounded by love as he makes his journey. Fuzzy is survived by his: wife, Anna (Cleere) Webster Herr of Muenster; daughters: Dianna and husband Steve Klement of Muenster, Pat and husband Todd Davis of Pampa, TX, and Rose and husband William Schmidlkofer of Bedford, TX; sons: Fray and wife Nancy Webster of Colleyville, TX, Johnny and wife Eve Herr of Nolanville, TX, and Jimmy and wife, Jamie Herr of Saginaw, TX; sisters: Ann Bengfort of Lindsay, TX, and Pat and husband Jimmy Brown of Checotah, OK; twenty-two grandchildren and fourteen great grandchildren. He was preceded in death by his parents, John and Ursula Sophia (Koelzer) Herr, first wife, Joyce (Rumley) Herr, sisters: Jean Brown, Theresa Pettigrew, and Alma Marr; and his brother, John Michael Herr.

The family of Richard "Fuzzy" Bernard Herr created this Life Tributes page to make it easy to share your memories.

Send flowers to the Herr family.