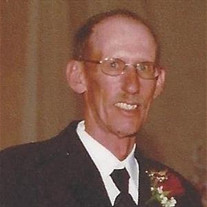 Liturgy of the Word for Roy Lee Klement, age 63, of Muenster was held at 10:00 AM, Saturday, March 31, 2018 at Sacred Heart Catholic Church with Father Ken Robinson officiating. Burial followed in Sacred Heart Cemetery. Rosary and Vigil were held at 6:00 PM, Friday, March 30, 2018 at the church. Pallbearers were: Vince Felderhoff, Greg Fisher, Bubba Klement, Darren Klement, Kyle Klement, LeAnn Helton, and Whitley Klement. Arrangements were under the direction of Scott Funeral Home in Muenster. Mr. Klement passed away Wednesday, March 28, 2018. Roy Lee Klement was born on October 11, 1954 in Muenster, TX to Tony and Sis Klement. He was one of 15 children. Roy graduated in 1973 from Muenster High School. He was also a member of Sacred Heart Parish and the Knights of Columbus. He married Carol Felderhoff on June 12, 1976. They had three children Ryan, Brandon, and Kimberly. Kimberly married Cory Charles. They have two children, Brody and Caroline who made him a Grandpa. He knew he wanted to be called "Grandpa" like his dad Grandpa Tony. Roy worked many years for Felderhoff Brothers as a driller. Then he spent 20 years working for Peterbilt. Brody and Caroline always loved to spend the night with Grandpa and Nit Nit. They remember grandpa by how he would bring them a big glass of chocolate milk in bed before they even got up! Then they could enjoy one of the best breakfasts with bacon and scrambled eggs. Roy was an avid deer hunter and enjoyed hunting trips to Colorado. Processing was done at the grainery with lots of advice especially from Grandpa Tony. The Felderhoffs enjoyed when Roy brought his sausage to their family gatherings. Ryan and Brandon were always along side helping to feed the cattle and pick the garden. They were his right hand men. His kids all had their nicknames ... He'd say to Ryan and his friends, "are y'all going Cattin' around?" This is how Ryan became known as Cat, and with Cat came Dog aka Brandon. He made his only daughter feel special with the nickname Special K. Kimberly still has a box of Special K cereal he bought her when she was newly married. Roy is survived by his wife, Carol (Felderhoff) Klement of Muenster, daughter, Kimberly (Cory) Charles of Muenster; sons: Ryan Klement of Muenster and Brandon Klement of Muenster; grandchildren: Brody and Caroline Charles of Muenster; sisters: Patsy (Paul) Dangelmayr of Muenster, Joyce Bayer of Muenster, Janet (Willie) Fischer of Muenster, Alice Walterscheid of Muenster, Diane (Dave Muller) of Muenster, Darlene (Don) Abney of Saint Jo, Marlene (Giles) Walterscheid of Moss Lake, and Peachy (Neil) Huchton of Muenster; brothers: Robert Klement of Muenster, Steve (Diana) Klement of Muenster, Kevin Klement of Muenster, and Gary Don Klement (Charles Cummings) of Gainesville. He was preceded in death by his parents, Anthony Joseph and Margaret (Hartman) Klement, brothers: Jim Klement and Pat Klement, brothers-in-law: Tom Bayer, Kenny Walterscheid, and Mike Felderhoff. The family requests memorials be made to the Muenster Volunteer Fire Department.

The family of Roy Klement created this Life Tributes page to make it easy to share your memories.

Liturgy of the Word for Roy Lee Klement, age 63, of Muenster...