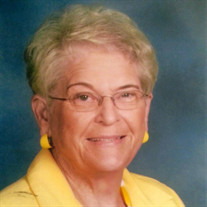 Mass of Christian Burial for Theresa Ann (Haverkamp) Grewing of Muenster will be held at 10:00 AM on Thursday, April 28, 2022 at Sacred Heart Catholic Church. Rosary and Vigil will be held at 6:30 PM on Wednesday, April 27, 2022 at Scott Funeral Home in Muenster. Mrs. Grewing passed away on Monday, April 25, 2022. Theresa was born on June 27, 1939 in Muenster to Ora Mae ‘Virginia’ (Scarborough) and Charles J. ‘Charlie’ Haverkamp. From a young age, she showed her leadership and love for people. The oldest among her siblings: Pauline, Nancy, Alive, Lillie, Sharon, and Charlie, whether it was wearing potato sack dresses, to working on the farm, she did it all. She was strong willed and willing to do anything for the people she loved. Theresa was also very mischievous in her younger days. When she had, who would later become the love of her life, Joe were younger, Theresa wanted so badly to ride his brand-new bike. She got some of her friends to distract him so that she could sneak over and grab it. Right before Theresa got going on the bike, Joe yelled at her “What are you doing? Get off my bike!”. From that moment, their relationship blossomed. Years later, on November 27, 1957 Joseph Henry Grewing and Theresa Haverkamp were married in Muenster. The couple were soon blessed with six children: Anita, Linda, Don, Mark, Bill, and Rebecca Jo. Sadly, Rebecca Jo passed away as an infant. Her five surviving children will forever cherish the memories they have of their mom. Bill will remember Theresa getting chased by their turkey while trying to get themselves in the car. She ran as fast as she could to get to the driver’s side and beat the turkey after putting Bill in. She didn’t quite beat the Turkey to the door. However, she did swing a pipe knocking it smooth out. Thinking she had killed it, she called Joe to let him know. By the time Theresa got back over to the turkey, it had come back to life. That turkey never did mess with Theresa after. Anita will remember the time someone lit her sparkler in the car on the 4th of July. It was a windy day, so she got in the car and someone lit the sparkler for her. She got out of the car and was enjoying her sparkler when Linda turned around and noticed that Theresa’s car had gone up in flames. Mark will remember their mother and son Thursday date night’s. Starting one day when Carol and the girls went out, Mark didn’t want to them to have all the fun so he called up his mom. The two started their own tradition of playing in the game room, going out to eat, and Theresa’s personal favorite: getting strawberry milkshakes. Theresa always made sure she was home in time to go out on their Thursday night dates. Linda would bring out the cool grandma in Theresa. With her red bandana and her big sunglasses. Linda and her family would take Theresa on 4-wheeler and side by side rides. Although they never went over 15 mph, Theresa thought they were flying! She also enjoyed their trips to Marysville Creek. Don’s favorite thing about his mom was knowing that she was always there for him. It didn’t matter when, where, or what needed done, she never said no. Some of his best memories include Thanksgiving and Theresa’s dressing. Each year, he has called to ask how to make it. Even after all these years, he has only come close once. Theresa was known and loved by so many. She made many friends while working at Rohmer’s, Bayers, Hofbauers, the Dress Factory, and of course, Fischer’s. Theresa told everyone about how much getting to see other people made her day. She is survived by daughters: Anita and husband Michael Luttmer and Linda Rains; Sons: Don Grewing, Mark and wife Carol Grewing, and Bill and wife Katrina Grewing; 11 grandchildren; 30 great grandchildren; Sister: Nancy and husband Roger Henley; and brother: Charles and wife Lynn Haverkamp. She was preceded in death by her husband: Joe Grewing; parents: Charlie and Virginia Haverkamp; daughter: Rebecca Grewing; grandchildren: Jayson ‘Jay-Bob’ Luttmer and Paige Grewing; sisters: Pauline Jones, Lillian Haney, Alice Jackson, and Sharon Wade; son-in-law: Mitch Rains; and daughter-in-law: Debra ‘Debbie’ Grewing.

The family of Theresa Ann (Haverkamp) Grewing created this Life Tributes page to make it easy to share your memories.