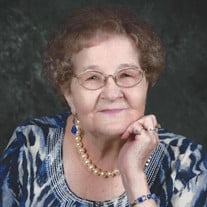 Mass of Christian Burial for Theresa Veronica (Fuhrmann) Huchton, age 85, of Muenster will be held at 10:00 AM on Tuesday, April 30, 2019 at Sacred Heart Catholic Church. Burial to follow at Sacred Heart Cemetery. Rosary and Vigil will be held... View Obituary & Service Information

The family of Theresa Veronica (Fuhrmann) Huchton created this Life Tributes page to make it easy to share your memories.

Send flowers to the Huchton family.