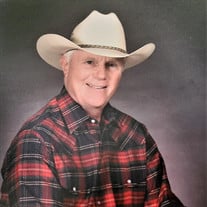 Liturgy for Thomas William Gressett will be held at 1:00 PM on Wednesday, February 24, 2021 at Sacred Heart Catholic Church. Thomas William Gressett (A.K.A. Crazy Tom, CT, Mr. Tom, or Pauche), age 80 years-old, of Muenster, Texas, passed away on February 21, 2021, after a sixteen-year battle with cancer. Born in New York, Tom’s family returned to Texas shortly after, where he grew up in Oak Cliff. From 1958 to 1961, he served in the United States Army overseas in Germany as an administrative specialist and in the medical corps during the Cold War. After returning home, Tom went to work for St. Paul Hospital in Dallas as a respiratory therapist where he met the love of his life, Carol Ann Wimmer. She couldn’t resist his charm (who could?), and they were married on January 29, 1966. They welcomed two children during their marriage, Gayle Denise in 1966 and David William in 1968. From carnival carney to drug dog handler to train conductor, Tom worked a lot of different jobs in his life, but his favorite job was as a bus driver for Muenster ISD. He enjoyed staying at school after his bus route to give the students high fives and fist bumps as they arrived at school. While his grandkids were young, he loved to volunteer his time with their sports teams as a water boy. Tom liked to spend time with the local kids because they had the same joyful spirit as him – always laughing, always smiling, always joking around. In his free time, Tom loved a good round of golf and shot two holes-in-one (holes 4 and 8 at Turtle Hill Golf Course) during his golf career. He also loved to cruise around town in his truck, revving the engine, turning the music up loud, and burning out so you’d know that he drove by. Among his proudest accomplishments was his award-winning yard and his family. Tom is survived by his wife of 55 years, Carol Gressett; and his children, Gayle BaumBach and her husband Scott, David Gressett and his wife Michelle. He is also survived by his brother, Gerald Gressett and his wife Patricia; and his grandchildren, Joshua BaumBach, Caroline Bezner and her husband Brad, Sarah BaumBach, Dylan Gressett and his wife Eden, and Dayton Gressett. He was predeceased by his parents, Ernest and Florence Gressett.

The family of Thomas William Gressett created this Life Tributes page to make it easy to share your memories.

Liturgy for Thomas William Gressett will be held at 1:00 PM on...

Send flowers to the Gressett family.