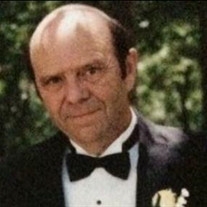 Funeral service for Thomas (Tommy) N. Thompson, age 76 of Longview, formerly of Saint Jo, was held 2:00 PM, Sunday, November 12, 2017 at Scott Funeral Chapel in Saint Jo and officiated by Rev. E. Sam Campbell. Burial followed in Mountain Park Cemetery in Saint Jo. A visitation held 12:30—2:00 prior to the funeral. Pallbearers were Johnny Murphree, Roger Teague, Ray Kinnard, LaChrista Fuscaldo, Jearl Teague, and Michael Ball. Arrangements were under the direction of Scott Funeral Home in Saint Jo. Mr. Thompson died Thursday, November 9, 2017. Thomas Newell Thompson was born April 23, 1941 in Saint Jo to Newell Walter and Laura (Edwards) Thompson. He grew up in Nocona but lived more than half his life in Longview. Tommy married Carolyn Bailey and they became the parents of three children. Tommy was a loving husband and father. He was an entrepreneur that designed and sold packaging and shipping containers. He also did wood working and refinished furniture. He loved to be in the outdoors, fishing, hunting, and trips to the mountains. Tommy never met a stranger. He was a great storyteller but you couldn’t always tell if his stories were true or if he was “pulling your leg.” He loved trivia and always had facts to share about any subject. He enjoyed watching sports – especially the Rangers and the Cowboys. Tommy is survived by his wife, Carolyn (Bailey) Thompson of Longview; daughters: LaChrista and husband, Gregg Fuscaldo of Euless, and Amy and husband Michael Ball of Denton; two grandchildren: Trinity and Tristan Ball of Denton; his sister, Kay and husband Elton Teague of Nocona and numerous nieces, nephews, and cousins. He was preceded in death by his parents, son, Gregory Wayne Thompson, sister, Sue Horner and brothers, Walter Thompson and Jerry Thompson.

The family of Thomas (Tommy) N. Thompson created this Life Tributes page to make it easy to share your memories.

Send flowers to the Thompson family.