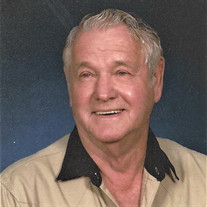 Funeral services for Travis Houston Moore Sr., age 81 will be held on Wednesday, April 3, 2019 at 2:00 PM at The First Baptist Church in Saint Jo, with Rev. Doug Underhill and Rev. Doug Allen officiating. Burial will follow at Perryman Cemetery in Forestburg, Texas. Family visitation will be at Scott Funeral Home in Saint Jo on Tuesday, April 2, 2019 from 6:00 PM to 8:00 PM. Travis died peacefully on Sunday, March 31, 2019 at Methodist Richardson Medical Center in Richardson, Texas. He was born on December 2, 1937, in Forestburg, to William and Lenora Moore, the youngest of 4 children. He married Linda Jackson Moore on January 28, 1956 and together they had three children, Regena, Wayne and Travis Jr. Travis attend Forestburg School and graduated in 1956. He and Linda moved to Fort Worth where he worked for General Dynamics until 1958. He and Linda then moved to Saint Jo, where he went to work as a butcher for Linda’s families grocery store, Jackson’s Grocery. In 1965 he and Linda purchased the grocery store that they owned for 15 years. Travis then pursued his dozer business, Moore Dozer Service, which they owned for over 40 years. He was a member of the Saint Jo Lodge no. 453 for over 50 years. During his life, he enjoyed farming and ranching, hunting and spending many hours with his grandkids and great-grand kids, all of which he took for a ride on his tractor and later on the ATV. He enjoyed participating in many school and non school activities that his grand and great grand kids were involved in. He is survived by his wife Linda Moore of Saint Jo, his daughter Gena Carter and her husband, Greg of Wichita Falls, Wayne and his wife Dorothy of Saint Jo, and Travis Jr and his wife Gina of Anaheim, California; sister-n-law Lena Ruth Lee; 9 grandchildren; 15 great-grandchildren; 1 great-great grandchild, 1 cousin and many nieces and nephews. He is preceded in death by his parents, William and Lenora Moore, brother, William Ancil Moore, brother Henry Don Moore and sister, Shirley Moore Harvill.

The family of Travis Houston Moore Sr. created this Life Tributes page to make it easy to share your memories.

Funeral services for Travis Houston Moore Sr., age 81 will be...

Send flowers to the Moore family.