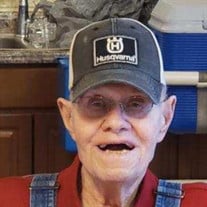 Vincent Forrester, age 84, of Saint Jo passed away early Wednesday morning June 3, 2020 in Nocona. Graveside service will be held at 10:00 AM on Saturday, June 6, 2020 at Perryman Cemetery in Forestburg. Visitation will be held from 6:00-8:00 PM on Friday, June 5, 2020 at Scott Funeral Home in Saint Jo. Mr. Forrester is survived by daughter: Mona and husband Paul Ray Baird; sons: Virgil and wife Julie Forrester; Michael Forrester, Mark and wife Djuna Forrester, and Vernon Forrester; 5 grandchildren; 10 great grandchildren; and numerous nieces and nephews. He was proceeded in death by his wife Irma Forrester in 2016, just after their 58 anniversary, and by his parents, Henry passing in 1973 and Edna passing in 1992, and one older brother, Harold, who was born and died on December 30, 1925. Vincent was born on Nov 8, 1935 in Decatur, Texas to Henry Homer Forrester and Edna Josephine (Poynor) Forrester of Saint Jo. He attended Saint Jo School. As a young man he worked at Wilde Chevrolet in Muenster, where he met Irma Catherine Starke and at the old Stockyards in Ft Worth. The two were married on Feb 17, 1958 in Muenster and honeymooned in Colorado. They resided a few years in the town of Saint Jo, then moved to their newly constructed home northeast of Forestburg in early 1965. They raised their family of five children, teaching them a good work ethic and the importance of good manners. Vincent held a steering wheel in his hands for most of his life, driving a milk truck for AMPI to dairy farms in the Cooke County area. He also drove for Van Roach Cattle Company of Ft Worth, Gerald Lanier Cattle, and long hauls to Colorado. Vincent had the chance to drive several brands: Mack, Freightliner, Kenworth, and Peterbilt. His CB-radio handle was “Farmer”. He spent close to three decades driving trucks and was proud that his sons could drive trucks and operate and array of equipment. For 20 years he drove a bus morning and afternoon for the Forestburg Independent School District, retiring in 2009. After he and Irma celebrated their 50th anniversary they traveled to Alaska and after retiring from driving the school bus, they made a trip to Hawaii. Throughout the years the Forrester's took many trips in their RV and after Irma’s passing, Vincent made three trips to Colorado with his family, a favorite destination over the years. Vincent was known for his somewhat quiet nature, but also for his quick quips, bordering on being a little bit ornery, he loved to joke and kid around. In lieu of flowers, donations can be made to the Forestburg Education Foundation or Perryman Cemetery. Forestburg ISD Education Foundation PO Box 415, Forestburg, TX 76239 940-964-2323 Perryman Cemetery Association, Inc. PO Box 34 Forestburg, TX 76239 Phone: (940) 964-2415

Vincent Forrester, age 84, of Saint Jo passed away early Wednesday morning June 3, 2020 in Nocona. Graveside service will be held at 10:00 AM on Saturday, June 6, 2020 at Perryman Cemetery in Forestburg. Visitation will be held from 6:00-8:00... View Obituary & Service Information

The family of Vincent Forrester created this Life Tributes page to make it easy to share your memories.

Send flowers to the Forrester family.