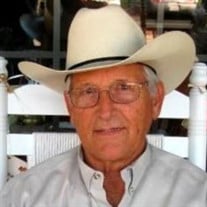 A memorial service for Walter B. Haynie will be held at 2:00 PM on Saturday, May 15, 2021 at the Montague County Cowboy Church in Montague. For those that cannot make the service, it will be live streamed on the Montague County Cowboy Church website. Walter B. Haynie no longer lives by faith, but by sight as he joined his heavenly Father on Sunday, Dec. 20, 2020. He surely joins the Apostle Paul in, “I have fought a good fight. I have finished my course. I have kept the faith.” II Timothy 4:7 Walter was born on October 8, 1926 in Amarillo, the fourth of eight children, to Wilson Dan Haynie Sr. and Violet Lurline McAdams Haynie. He was lovingly called Walter Babe. It was not until he joined the Navy during WWII that he learned his middle name was Boothe. In the midst of the Great Depression, Walter struck out on his life adventure at age 11 with a 6th grade education. He worked in the rice fields of south Texas and then on the railroad at an early age as most of the men were off in the war. Walter was a proud WWII Veteran and a true patriot who loved his country. He joined and fought in World War II in the Pacific Theater aboard the USS LST 743. When he returned home from the war, Walter met and six weeks later, married Marian Joe Dolby and answered the call to the ministry. In 1952, he graduated from Howard Payne College with a double major and honors and later from Southwestern Baptist Seminary with a master’s in theology in 1957. During their time in college and the seminary, Walter and Marian added to their family Melody Ann, Deborah Kay, David Michael, and Mark Whayne. Walter’s ministry took him to Texas churches in Charlotte, San Antonio, Highlands, Cedar Creek, and Nocona (where he founded Shepherd of the Hills Baptist Church), and Montague. He also pastored in Terral, Oklahoma twice. During his pastorate, he helped to organize and start Hispanic mission churches in the Charlotte and San Antonio areas. He also served in the mission field in Honduras and Afghanistan. After the death of Walter’s wife, Marion, Walter married Clara Shults, who served with him in his ministry as well as the mission field. Although he retired from the full-time ministry in April 2010, he continued preaching as a lay pastor until age 93. Inspired by his great-great-grandfather, the Rev. John Haynie, a circuit riding preacher in the 1800’s, Walter had a vision to establish and build a cowboy church. At age 80, he founded the Montague County Cowboy Church and began weekly church services in the local sale barn and later in their beautiful church. In 2010, he handed over the reins to his friend and successor Joe Caballero. He was always a cowboy at heart and despite being a Baptist preacher, always enjoyed dancing, especially to “Waltz Across Texas”. In the late 1990’s he organized and headed up the Chisholm Trail Cattle Drive moving the herd through Terral, Oklahoma, heading for Montana. Walter was involved with Rotary Club, Odd Fellows, and was a Mason. He served as secretary and Chaplin of the “Old Trail Drivers of Texas.” While receiving numerous awards, his most humbling was being honored as the Howard Payne University Distinguished Alumnus in 2013. He was one of the WWII Veterans privileged to take the Honor Flight DFW to Washington D.C. with his grandson Matthew. Walter and his son Mike travelled to New Orleans with Gary Sinise Foundation, Soaring Valor, to honor World War II Veterans. Walter’s often heard sayings were, “High Dollar”, “Golly Moses”, and “Whoa Nelly”. One of his favorite bible verses was, “For I know the plans I have for you,” declares the Lord, “plans to prosper you and not to harm you, plans to give you hope and a future.” Jeremiah 29:11 Walter loved his family and felt joy for his grand and great-grand grandchildren. To them he was Pappow. His family and friends loved and adored him. He truly was one of the Greatest Generation. Walter was preceded in death by his parents, wife Marian; daughter Melody Haynie Darby; son Mark Haynie; brothers Dan Haynie and Richard Haynie; sisters Dorothy Felts, Barbara Hale, and Harriett Vaughn. He is survived by his wife, Clara; daughter, Deborah Haynie; son, Mike (Doris) Haynie; sisters Dolores Jones and Inez West; daughters-in-law, Chris (Raymond) Root, Corie Gallagher, and Cheryl (Melvin) Yosten, and his precious grand and great-grandchildren, nieces, and nephews. He also leaves his dear friends, Ben and Amanda Graves of San Antonio, Rev. Lamoine Champ and John Parker of Nocona. The family would like to thank all staff at Muenster Memorial Hospital. They cared for him so tenderly and treated him with such dignity. Upon learning that he loved to dance, his sweet nurse Sarah delighted Walter by waltzing with him while in his wheelchair. In lieu of flowers, please make donations to Howard Payne University Alumni Association at 1000 Fisk Street, Brownwood, TX 76801 or Montague County Cowboy Church, P. O. Box 4, Montague, TX 76251. Tributes can be made on the Scott Funeral Home of St. Jo website; scosttfhsj.com. Happy Trails to this Cowboy who saddled up and left on his final trail ride!

The family of Walter B. Haynie created this Life Tributes page to make it easy to share your memories.

Send flowers to the Haynie family.