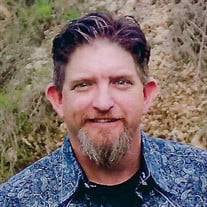 Weldon James Bayer, 46, went to be with his Lord and Savior on October 7, 2021. He was a loving and devoted husband, father, son, brother, brother-in-law, nephew, cousin, uncle, Godfather, and friend. Weldon was born to Clinton and Barbara Bayer on October 7, 1975, in Muenster. Weldon had three brothers; Jared, Heath, and Lucas. He grew up in Muenster and graduated from Sacred Heart Catholic School in 1994 and he was a member of Sacred Heart Parish. On February 25, 2001, Weldon married the love of his life, Loren Hermes and they had three children; Emily, Corbin, and Owen. Weldon showed us how to live a Christian life by being a loving and caring person. He would take the time to make everyone feel accepted and welcomed. He would always greet you with a smile. His family and friends will forever remember his giving nature. Weldon enjoyed spending time with family and friends and making you laugh. He also enjoyed going on trips with his family. He and Loren went on many motorcycle trips together. He started working on the family farm from a young age. This is where he learned the value of hard work. After high school he began working at Walterscheid Meat. He worked there for 10 years. He then moved on to work at Muenster Garden Center where later he would become the owner and operator. Even as the owner, Weldon would take the extra time, and at times drop everything, to help others when they couldn’t go to him for help. Many times you would see him on a trailer working on a mower. Weldon received many awards for his accomplishments at the Garden Center. Among the many accomplishments he was able to make the Garden Center a successful business with one product. That is not an easy thing to do but with his personality it was an easy task to do because people loved and trusted him. Weldon is survived by his wife, Loren, daughter Emily and sons Corbin and Owen, parents, Clinton and Barbara Bayer, father-in-law James Martin, brother Jared and wife Leah, their children Katie, Clayton, Hunter and Shelby, brother Heath and wife Olivia, their children Isaiah, Erik, Melanie and Adelaide, brother Lucas and wife Michelle, their children Elijah, Mason and Benjamin. He is preceded in death by his mother-in-law Karlyn Martin. Weldon gave in death as he gave in life. Weldon’s final act of charity was to give the gift of life through organ and tissue donation. Through this gift many people will be blessed. Visitation and Rosary were held on October 12, at Sacred Heart Catholic Church. Funeral Mass and Christian Burial were held Wednesday, October 13, at Sacred Heart Catholic Church in Muenster presided by Father Joseph Keating.

Weldon James Bayer, 46, went to be with his Lord and Savior on October 7, 2021. He was a loving and devoted husband, father, son, brother, brother-in-law, nephew, cousin, uncle, Godfather, and friend. Weldon was born to Clinton and Barbara... View Obituary & Service Information

The family of Weldon James Bayer created this Life Tributes page to make it easy to share your memories.

Weldon James Bayer, 46, went to be with his Lord and Savior on...