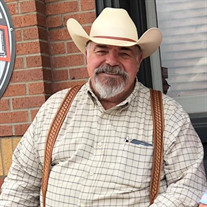 Wendell Thompson went to heaven on Friday, February 22, 2019 after a lengthy illness. He was surrounded by his family and loved ones. Funeral services were Sunday, February 24, 2019 at Illinois Bend Cemetery in Illinois Bend, Texas. Wendell, born in Cooke County, Texas, was the only child born to Wayne and Dell (Steadham) Thompson of Dye Mount, Texas on March 3, 1946. Wendell attended Saint Jo Schools and graduated high school in 1963. He attended North Central Texas College and East Texas State University (Texas A&M Commerce). While attending college, he was hired by a local telephone company. Eventually he was employed by Centel Telephone Company (late owned by the Sprint Corporation) and worked his entire telephone career with the same company upon his retirement in 2008. He loved his career and was often referred to as “The Telephone Man”, he was the one everyone called when they had issues with their telephone service. Wendell was also a rancher and continued active with ranching until his death. Throughout his life, he enjoyed spending time at the local Diary Queen at “The Round Table”, working the cows and his favorite hobby was spending time with his family. He was known as a “straight shooter”, he would never lie to your or cheat you. Wendell was married to Linda (Dowd) Thompson for 50 years. Even though they knew each other during their high school years, they didn’t start dating until after high school. They married on June 8, 1968 at the First United Methodist Church in Saint Jo. They went on to have two children: Melissa and Kyle. The lived their entire lives in Saint Jo. Wendell served on the school board at Saint Jo ISD as well as the local volunteer fire department for many ears. In 1976 while Wendell was the fire chief, his own house caught on fire. After that, he was teased about being chief and letting his house and vehicle burn. He and Linda built a house in the same location and lived there the rest of their lives. Wendell is preceded in death by his parents, Wayne and Dell Thompson. He is survived by his wife, Linda(Dowd) Thompson of Saint Jo, his daughter Melissa and husband George Chaffin of Dye Mound, and his son Kyle and wife Chelsie of Decatur. He has 4 grandchildren, Kaitlyn and husband RJ Metzler of Alvord, Luke Chaffin and fiancé Ashley Davis of Woodbine; Layton Wayne Thompson and Paisley Carolyn Thompson of Decatur. He is also survived by 3 great grandchildren: Jase Chaffin, Gavin Chaffin, and Hagen Metzler. In lieu of flowers, the family ask that donation be made to the Illinois Bend Cemetery Fund. Memorials may be mailed to Illinois Bend Cemetery in care of Wanda Parker 512 Dowd Rd., Saint Jo, TX 76265.

Wendell Thompson went to heaven on Friday, February 22, 2019 after a lengthy illness. He was surrounded by his family and loved ones. Funeral services were Sunday, February 24, 2019 at Illinois Bend Cemetery in Illinois Bend, Texas. Wendell,... View Obituary & Service Information

The family of Wendell Wayne Thompson created this Life Tributes page to make it easy to share your memories.

Send flowers to the Thompson family.