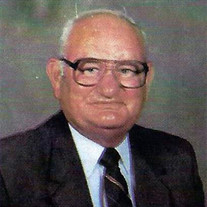 Memorial Mass to honor the life of Wilbert Joseph Vogel, age 87, of Muenster, Texas will be held at Sacred Heart Catholic Church in Muenster on Wednesday, October 31, 2018 at 10:00 AM. Rosary service will be at 6:30 PM on Tuesday, October 30, 2018 at Sacred Heart Catholic Church with a visitation to follow at the Community Center. Wilbert was born on August 3, 1931 in Myra, Texas to Joseph Frank Vogel and Frances (Hartman) Vogel. After graduating from high school, Wilbert enlisted in the Air Force. He took basic training at Keesler Air Force Base in Biloxi, Mississippi. After duty at various stations, he was transferred to Bergstrom Air Base in Austin, Texas and served as Control Tower Operator there until hi discharge in 1954. He then went to Houston and worked part-time as a city bus driver while attending the University of Houston where he majored in Petroleum Engineering. Shortly after graduating, he went to work for Baker Oil Tool Company. Wilbert worked in Houston and Dallas, also as the Regional Manager over the Middle East in Tehran, Iran and then as the Regional Manager for Europe and Africa in London England where he resided until 1986. Mr. Vogel passed to his eternal peace on Sunday, October 28, 2018 at Muenster Memorial Hospital. Mr. Vogel is survived by his loving wife Eve; son: William Vogel; sisters: Dorothy Beyer of Gainesville, Evelyn Otto of Gainesville, Lillian Walterscheid of Muenster, Norma & husband Don Muller of Denton, Corinna Keys of Little Rock, Arkansas, Virginia and Ken Sherrell of Rosston, Karren & husband Danny Hoenig of Denton; brothers: Leonard and wife Christel Vogel of Muenster, Donald and wife Janie Vogel of Saint Jo, Weldon Vogel of Dallas; and numerous nieces and nephews. Wilbert is preceded in death by his parents and sisters: Mary Lou Hess and Glenda Sue Vogel. The Vogel family asks that memorials be made to the Muenster Volunteer Fire Department or charity of your choice.

Memorial Mass to honor the life of Wilbert Joseph Vogel, age 87, of Muenster, Texas will be held at Sacred Heart Catholic Church in Muenster on Wednesday, October 31, 2018 at 10:00 AM. Rosary service will be at 6:30 PM on Tuesday, October 30,... View Obituary & Service Information

The family of Wilbert Joseph Vogel created this Life Tributes page to make it easy to share your memories.

Send flowers to the Vogel family.