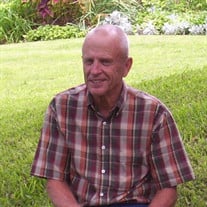 A graveside service for William (Bill) Thomas Meador will be held at Mountain Park Cemetery, in Saint Jo, at 10:00 am on Saturday, December 22, 2018. Pall bearers will include Gary Brewer, Roger Dunn, John Endres, Doug Gaston, Richard Haralson, Kevin Haralson, Craig McCrary, and Billy Poyner. Mr. Joe Gambill, Commissioned Lay Pastor, will officiate the burial. Mr. Meador died on December 18, 2018 in Wichita Falls. Mr. Meador was born October 24, 1941 to Smith Thomas and Lucy Small Meador. Mr. Meador spent his entire life in Saint Jo, TX, except for four years at Texas Tech University. He was a graduate of Saint Jo High School and Texas Tech, where he was a member of the track and cross-country teams. Mr. Meador was a longtime member of the St. Jo Volunteer Fire Department and a lifelong member of the Presbyterian Church. Mr. Meador was perhaps best known for his farm and ranch work. He gave many young men their first job hauling prairie hay. He will be remembered for his strong work ethic, his honesty, and his conservation efforts for the native prairies that he loved. Mr. Meador was the recipient of several awards that recognized his land stewardship, including the Lone Star Land Stewards Award. He is survived by his sister, Lucie Meador Martin of Saint Jo; a niece, Sarah Martin Naper, and her husband, Matthew, of Buda, TX; and two nephews, Thomas Lewis Martin, and wife Melissa, of Bellevue, TX; and Michael Emmett Martin, and wife Laurie, of Saint Jo.

The family of William Thomas "Bill Tom" Meador created this Life Tributes page to make it easy to share your memories.

A graveside service for William (Bill) Thomas Meador will be...

Send flowers to the Meador family.