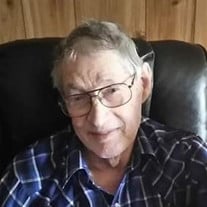 W.J. “Dub” McBride, age 75 of Saint Jo, passed away Monday, June 4, 2018 at his home. Dub, as he was known to everyone, was born April 15, 1943 in Thackerville, OK to L.C. and Minnie (Youngblood) McBride. He married Velma Earlene Brackeen in Cooke County, TX on December 29, 1966. They were married for almost 48 years before her death in 2014. They were the proud parents of two children. One of the highlights of Dub’s life was spending time with his two grandchildren and five great-grandchildren. Dub served in the US Navy and went to Vietnam for two tours in 1964 and 1967. He worked as a machinist as well. Dub is survived by his daughter, Laura and husband, Mike Barnett of Springfield, Missouri; two grandchildren: Baylie Carter of Springfield, Missouri and Byron Aston of Springfield, Missouri; five great-grandchildren: Bentley Aston, Brison Aston, Karlie Aston, Micheal Carter, and Ellaina Carter; and sister, Leota McBride Clark of Gainesville. He was preceded in death by his wife, Velma (Brackeen) McBride, son, Eric Lawton McBride, parents, L.C. and Minnie (Youngblood) McBride; sisters: Alice Aman, Merle Johnson, Pearl Ingram, and Mildred Rains; and brother, Bill McBride.

The family of Mr. WJ "Dub" McBride created this Life Tributes page to make it easy to share your memories.

Send flowers to the McBride family.